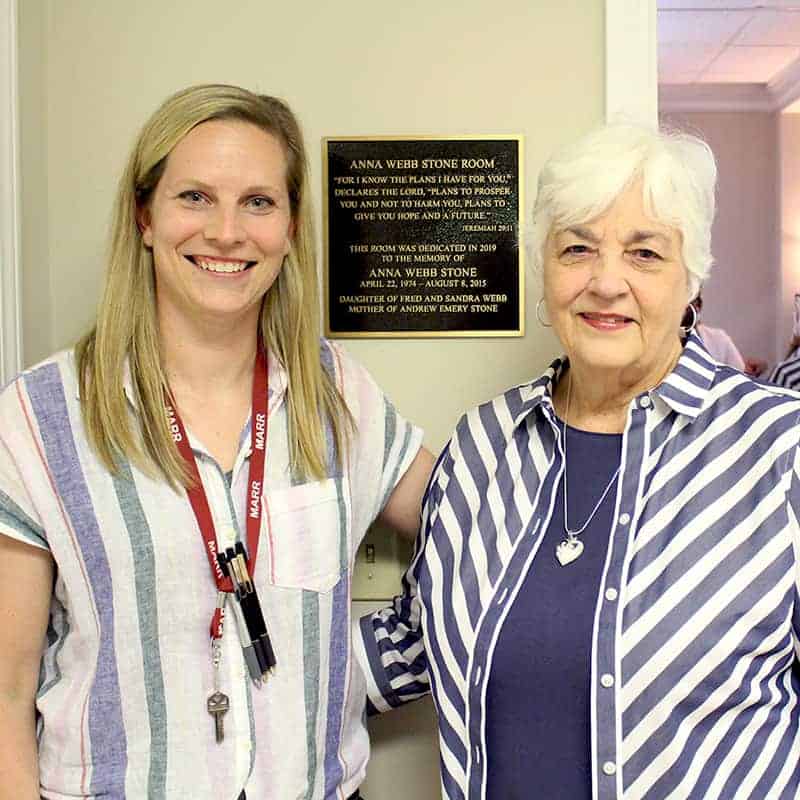 Our legacies outlive us. Our stories will continue to touch people and places long after we are gone. Our struggles and strength will inspire others when our journeys have come to an end. This is the power and beauty of true community.

Anna Webb Stone came to MARR’s Women’s Recovery Center after several years of struggling with addiction. She became addicted to prescription pain pills in her early twenties when they were prescribed to her after a dental surgery. Her mother, Sandra Webb, went to church with MARR’s founder Donnie Brown and his wife, Sue. The Browns encouraged Sandra through the process of getting her daughter into treatment.

At the age of 6, Anna developed juvenile Type 1 diabetes, and her family was told that she was expected to live for 30 years after the onset of the disease. Although this proved to be a struggle for Anna and her family for her entire life, she was always resilient.

Anna came to MARR in 2009. She finished phase one of treatment and learned a lot about her addiction and about herself. She had a true desire to overcome her addiction and be a better mother to her son. She moved to three-quarters and got a part-time job while still at MARR.

Meanwhile, Sandra participated in MARR’s family workshops to learn how to best support her daughter. She attended a family support group that is still led by Doug Brush every Wednesday night. She says that she truly believes that addiction is a family disease, and family members and their addicted loved ones must each work their own recovery.

Anna eventually made the decision to leave MARR and return home. Her disease continued to progress and she continued to fight. Anna Webb Stone passed away on August 8, 2015 due to complications from a heart attack that she had a few months prior. She was celebrated as a beloved mother, daughter, and friend. 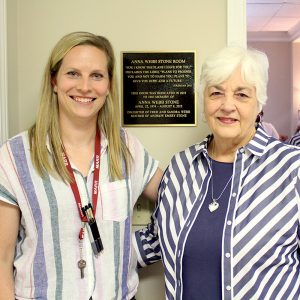 In 2018, Anna’s mother, Sandra Webb, made a generous donation to MARR’s Women’s Recovery Center in her honor. This donation allowed us to expand the main group room and update the kitchen at the WRC.

As part of the ceremony, Jim Seckman read some passages from the Big Book chapter entitled, “Women Suffer Too.”

I went trembling into a house…filled with strangers and I found that I had come home at last.

There is another meaning for the Hebrew word that in the Bible is translated “salvation.” It is: “to come home.” I had found my salvation. I wasn’t alone anymore.

That was the beginning of a new life, a fuller life, a happier life than I had ever known or believed possible.

I had found friends, understanding friends who often knew what I was thinking and feeling better than I knew myself, and didn’t allow me to retreat into my prison of loneliness and fear…

Suddenly, I could accept myself, faults and all, as I was–for weren’t we all like that?

As MARR staff, volunteers, and clients gathered to honor Anna and dedicate the room, there was a sense of purpose in the air. In the midst of despair, there was hope.

For many years to come, women will walk through the door of the Anna Webb Stone Room and discover a place of acceptance, community, and healing. Her legacy will continue to touch lives and inspire others in their journeys of recovery.

Ep 7: As Angry As I Was, It Still Worked

The Whirlpool of the Family Disease